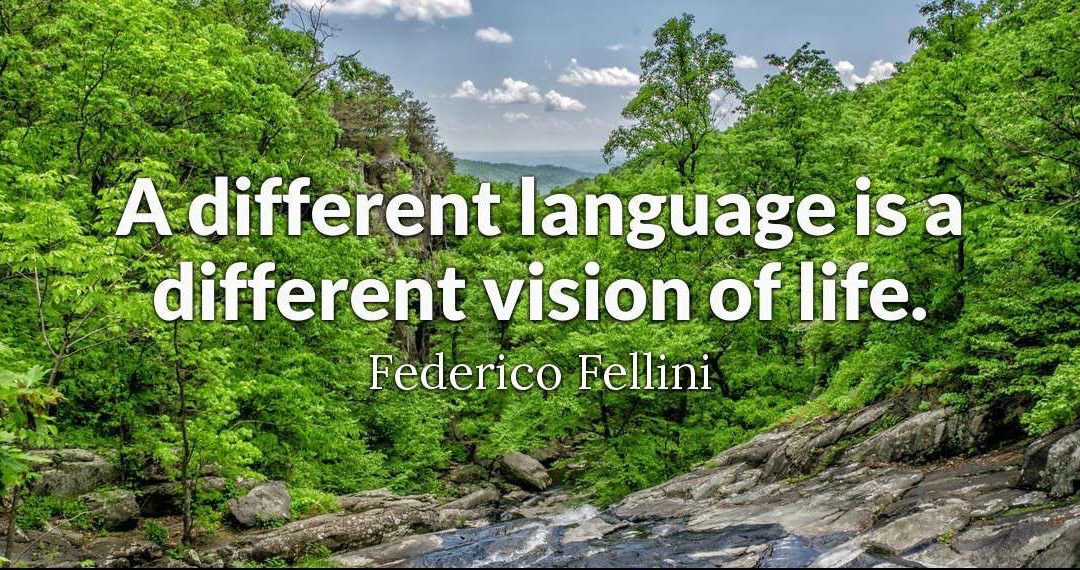 How many Languages do you speak?

Have you started to notice that you are speaking the language that people over 50 speak?

Do you speak “Old Fogue”? Or do you speak the language of “Vitality”?

Your friends start to say things like- “When you get this age” or tease you about being “Over the Hill”! If you are a woman- then you are no longer a “Spring Chicken” and if you are a man you get everything from “Old Man” to “Grandpa”.

Language matters! How you think and speak about yourself as you AGE- effects the outcome!

The same is true when it comes to how society and culture at large refer to “Senior Citizens” – “The Elderly” or “Old People”.

Let’s explore the definition of “OLD”:

1. Having lived for a long time; no longer young.

2. Belonging only or chiefly to the past, former or previous

Think about it- do you really want to be referred to as anything related to the above definition? Interestingly enough, the most recent poll on aging and terminology revealed that the preferred term for people over 65 is “Older Adults”. It’s not ideal- just somewhat acceptable. The term “Senior” is on its way out and “Senior Citizen” grates on the nerves of most that were polled- especially Boomers.

What would you want to be called? What would make you feel “Forever Young” and Vital? Many Baby Boomers seem to identify most with the term “Boomers”. Everyone seems to be searching high and low for a new term to call the large group of 50 plus adults that are crossing into their second half of life! Hopefully, along with that term will come a new and more positive “languaging” around how we see AGING.

In an article on “Why the language we use for Aging Matters”, Susan Williams addresses the following: Even subtle suggestions can undermine our attitude and confidence. So when we extend this to the language that surrounds aging, it is no wonder it has such a negative perspective.

Take the terms old bag, cranky old man, over-the-hill, decrepit, getting on, no spring chicken – not great images right? And they are all attached to thoughts about being old.

There is yet another language that begins to happen when people get older. It is the language used when speaking with people in their 70’s plus. It is referred to as “Elderspeak”- defined as a “manner of communicating to older people using a slow rate of speaking, simplified syntax, vocabulary restrictions, and exaggerated prosody on the assumption that their age makes them cognitively impaired”

You’ve seen it and you’ve heard it- when people begin to speak to their elders as if they are children instead of fully functioning adults. It is demeaning and current research shows that those on the receiving end of it begin to show aggression and passive aggression.

Rylee Dionigi, a renowned Gerontologist researched the Stereotypes of Aging and Their Effects on the Health of Older Adults. Some of her findings were as follows:

Stereotypes of aging in contemporary culture, particularly North America, are primarily negative, depicting later life as a time of ill health, loneliness, dependency, and poor physical and mental functioning. Views of old age, and the perceptions older adults hold of themselves, are complex, multidimensional, and dynamic.

Becca Levy, an associate professor of psychology at the Yale School of Public Health and lead author of a current study on aging is convinced that such negative stereotyping is a “public health issue.” The good news is that during the last 20 years a growing number of studies clearly demonstrate that what we think about and how we feel about aging changes the outcome of our lives. Nine of the most interesting are:

Begin today to start speaking to yourself and to your friends and loved ones with a language of Vitality! You will know the difference by how you FEEL when you speak and hear it! Do you feel EMPOWERED? HOPEFUL? ADVENTURESOME? CREATIVE? ENERGIZED?

What else can you do? Hold yourself accountable for your physical health, stamina, engagement and activities. Stop making age related excuses for yourself. If necessary- find some new friends who have similar attitudes about aging and who inspire you to push yourself!

If you feel that you need additional support we have a program that is tried and true and has literally turned people’s lives around!

The Vitalign System offered by the Vital Lifelong Institute offers you the support needed as you learn a new way of living from 50 on! We teach you how to RETHINK- REDEFINE- and REINVENT the BEST YEARS OF YOUR LIFE!

Life is short- even if it is long- make every day count!

Just imagine what great things you will do next!

“But is thought corrupts language, language can also corrupt thought.”